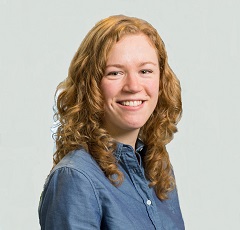 Lovisa Westlund Gotby studied Engineering Physics (BSc.) at Chalmers University of Technology, Gothenburg, Sweden, after which she studied Biomedical Engineering with a specialization in Medical Physics (MSc.), partially at the TU Delft. She carried out her master’s thesis, entitled “Intensity Modulated Proton Therapy for Hepatocellular Carcinoma - A Simulation Study of the Interplay Effect for Comparison with Photon Therapy”, at the Erasmus MC, Rotterdam, in collaboration with the Department of Physics at Chalmers. After graduating, Lovisa worked for 1.5 years in the MRI industry as an R&D RF engineer and as a process leader. In 2020 Lovisa started her PhD at the Department of Medical Imaging at Radboud University Medical Center in Nijmegen. In her project she aims to improve current and develop new dosimetric methods for microbrachytherapy with holmium microspheres. She is supervised by Frank Nijsen and Mark Konijnenberg.